Being Elmo: A Puppeteer’s Journey 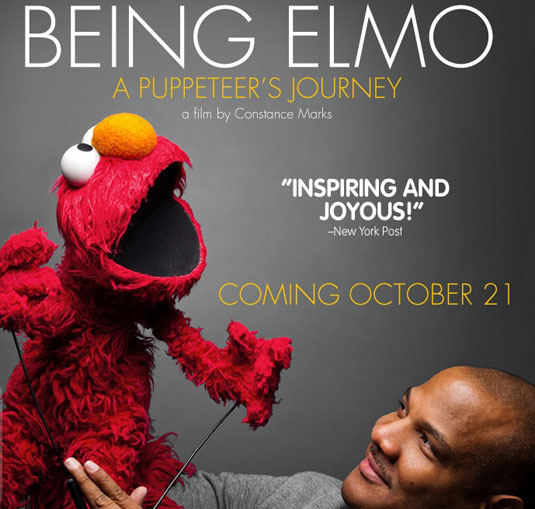 When I saw for the first time who Elmo was handled by I was speechless. It was a tall handsome man called Kevin Clash.” How could this guy talk in such a high pitch voice?” was the first thing that came to mind, but as soon as he started doing his Elmo impression my mind went blank: I just kept looking from Kevin to Elmo and vice versa. And that was why I just couldn’t wait to see this documentary about him, “Being Elmo: A Puppeteer’s Journey”, who follows Kevin’s life and his passion for puppeteering since he was nine years old.

Like on stage where you only can see the character but not the handler, what fascinated me the most about this doc was the stories they just hint at you but don’t tell you completely. There’s this anecdote about him talking to his wife in Elmo’s voice while she was about to give birth to their daughter. Everyone around me at my screening burst out laughing, while I just kept thinking how the life of this man was on it’s everyday bases, when, like a method actor, he would just love being on character. Elmo wasn’t only his work. You can see examples like this all through the film, like him refusing to let others play his character, causing him to travel non stop just to meet contractual obligations. He saying that being surrounded by kids at all times while never being able to see his own made him sad moved me deeply, this was a man who’s passion literally owned his life. And this wasn’t the only touching moment, this film is about following your dreams in your own way (he was constantly instigated at school), finding mentors (Jim Henson), and the power of opportunity when you are prepared for it in the road to success. The Elmo puppet was actually discarded by another actor, and Kevin just went over and took it, and inspired by the kids in his life, he created what would become one of the most recognized characters worldwide.
This is a film that can be enjoyed by both kids and adults, and that definitively inspired me. Every time he would make public appearances as Elmo, it surprised me that he wasn’t always hiding and just showing Elmo, he would actually approach kids as the character was interacting with them. Younger kids would only look at Elmo as if Kevin wasn’t even there, the oldest one’s kept doing what I also did, just looking from the puppet to his handler back and forth, in a mix of curiosity and wonder. I heard an interview with him at the Apple store about this doc, he brought Elmo along, and even while talking as Kevin, once a little kid started crying in the audience, Elmo abruptly interrupted him and asked the child if he/she was o.k., and moments like this kept happening non stop, almost  as if two persons shared one body. That’s probably why this red character is so successful with kids, Kevin is able to fascinate even adults like me with his love, talent and dedication to his art, and of course, just by being Elmo.