From Inside The Walt Disney Animation Studios: The Art of Frozen

I had the priviledge of sitting down with Mike Giaimo, Lisa Keene and Brittney Lee, the team behind the Art Direction for FROZEN, the latest animated feature from Walt Disney Animation Studios. Not only the film looks stunning, but the journey these artists went through the four years involved in the project was fascinating as well.

Michael: “ I just was, was putting Post-Its on images I really loved, and realized most of them were very Norway inspired. So once we pitched  the idea of Norway to John Lasetter, what followed was a trip to Norway, so the art direction team went” 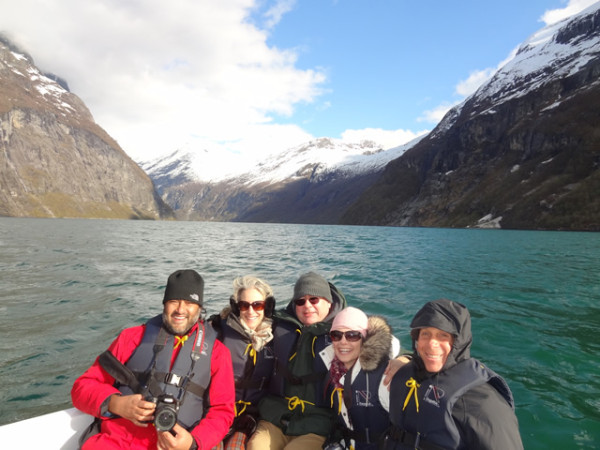 Michael: “One big take-away that was really important for us for the look of Frozen, it’s a small thing, but a big thing.  Is the idea of rosemaling.  Now, rosemaling means rustic painting in Norwegian, which really translates to basically folk art.  And it can be found on anything.  Certainly clothing, embroidery architecturally it can be found on ceilings, walls, columns, wood trim, furniture,  anything you can imagine, they decorate with rosemaling. But the other thing that was truly exciting for me was to not only have rosemaling here architecturally, but to have it on our characters, too, so that these two things have a conversation with each other, creates kind of a total world.  So all our characters will have this kind of detailing”

Michael:  ”Now I’m gonna have Lisa talk to you about one of the most important aspects of Frozenwhich is quality of ice, snow, and frost. There have been other CG films that have dealt with this, but for Frozen we knew that we would have to raise the bar and really exploit it to its fullest. The audience knows when something looks phony or fake, and yet we had to make it look beautiful and magical. So Lisa really helped us in developing that particular look for Frozen.”

Lisa: “So one of the jobs that I have on this project is lighting design, and when you’re faced with an entire world of snow and ice,  it’s a big white world, so how were we going to make our film beautiful for an hour and a half, with all this white?  Um, and I looked at it and thought, oh my gosh,you know, my background is painter, so I see that as a blank canvas.  And if you think about light in nature, lighting in color come from everything from moonlight to sunlight.You have early morning.  You have sunsets, storms, everything brings a hue to the world, and now we’re just layering that on top of white.”

Lisa: “Elsa has magical powers. So with those magical powers, she’s able to actually light the ice herself, and the inspiration that we took away from our trip to Quebec were these beautiful ice hotels, and the ice, they have all these beautiful lights that are set within the ice, and they show at night when when you get to see it. They have these lights rotating constantly, so these beautiful color pallets are constantly shifting and changing and moving, and it’s just a beautiful light show. So not only were we using natural glacier-like colors for our palace, but we were also using sunlight to affect those colors, and then we also have Elsa and the emotions that she is experiencing through our narrative, and we were using that to actually illuminate the ice from within, depending on her mood, and the experiences that she was having.” 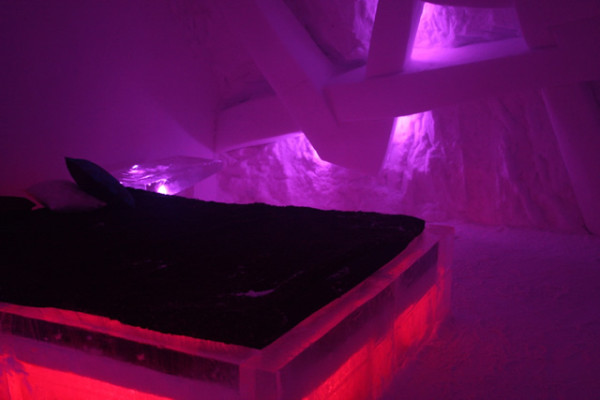 Brittney: “So, I grew up on Disney fairy tales, and it’s absolutely been a dream to be able to work on this film, and I was so lucky to be able to work with Mike on costuming on the show because it turned out that this show is a huge costume show, and unlike anything we’ve ever done before in animation, not only because of the number of costumes, but because of the layers of costuming all of the female characters are wearing petticoats and undergarments, and most of the characters are wearing coats and hats and mittens, and so  it’s a really complex wardrobe with extensive detailing because you never know how close the camera’s going to end up getting to all of these characters, so we really had to focus on the tiniest little details.”

“Another way that we add fun to the costumes is by giving every character, like Mike was saying before, uh, rosemaling to make them feel like they both fit in this world, but they can also be specific to each character.  So Anna is a playful, happy-go-lucky character, and so she has very playful, happy-go-lucky rosemaling. So our last challenge, I guess, with costuming was Elsa, because once she goes to her ice palace, there are no rules anymore.  She is essentially breaking from everything she knows, so what she ends up wearing has to be very different than what she wears before, but still speak to her language and where she’s come from.  So the way we decided to tackle that with Elsa was to use the snowflake and use the graphic symbol of the snowflake to replace her rosemaling. So she has details of snowflakes, but then she also has the shape of her cape is actually, if you were to lay it flat on the ground, it is an entire snowflake.  So she is completely enveloped in this new world of hers.” 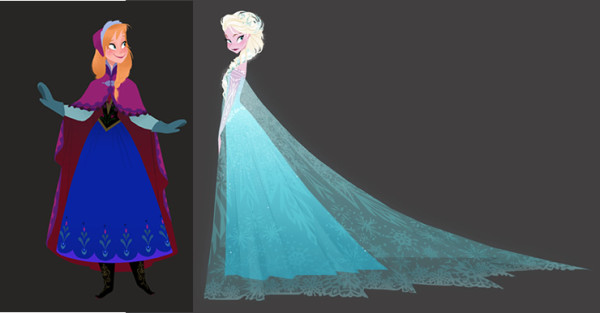 As you can see  not only many elements of this film actually have an inspiration from the real world, but that the art directors have to be incredibly creative and smart even before the characters and worlds are translated into CGI. There’s the misconception that in this type of films the “computer” does “everything, and there’s nothing farther from the truth. Even the animators do a lot of “pen and pencil” drawings and animation tests before using any software. It’s nice to realize in this era of “CGI invasion”, where the platform is usually overused in most live action films, that at least in animation is only the medium used to tell the story. And that at the end of the day, it’s actually the talent of all the creative people involved in the project what brings these stories to life.

This is an excerpt from an article I wrote originally for ScreenInvasion.com. If you want to read the entire piece you can find it here: http://screeninvasion.com/2013/11/inside-walt-disney-animation-studios-art-frozen/

I wrote another article about my visit to the Disney Animation Studios for Frozen. You can find it here: http://www.shemoviegeek.com/2013/12/a-look-inside-walt-disney-animation-studios-for-frozen-2/