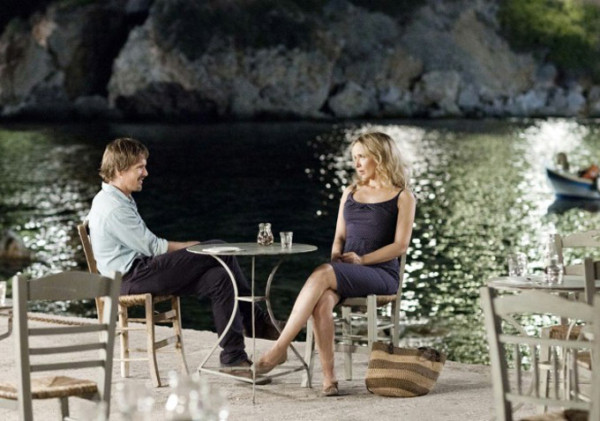 How do you sit down to write about a film that is, well, an exercise on writing? Masterful screenwriting to be more specific. Because when you want to bring closure to a trilogy of films mainly about two people talking, I guess there’s nothing left to do but let them finish. And that’s Before Midnight, the end of a conversation that started 18 years ago.

Director Richard Linklater managed to do with the two previous films on the trilogy, Before Sunrise (1995) and Before Sunset (2004) what only few have attempted successfully (insert Woody Allen/Sofia Coppola here): to captivate our entire attention while there’s nothing but conversation on the screen. No intricate drama, no C.G.I., just a couple questioning subjects such as existentialism, religion, dreams, and even time travel, while falling for each other at the same time, with such charm and chemistry that you can’t help but fall as well. You are submerged in a dazing idyllic romantic haze, and you don’t (or even want to) question it.

In Before Midnight  we find Celine (played by the incredible Julie Delpy) and Jesse (Ethan Hawke) almost twenty years after they first met in Vienna. They have now been together for nine years. And there’s still romance, there’s still chemistry, but even if their nemesis is not a train or a plane about to leave setting them apart, we still can’t keep our eyes away from the screen to see what happens next. The script is nothing but brilliant depicting both the beauty and chaos of long relationships. It’s able to reach such high emotional notes from simple pieces of dialog that it left me in awe. There’s a particular scene involving an elderly’s couple story that literally brought me to tears.

But don’t get me wrong, Before Midnight is far from being a melodrama. It’s filled (like its predecessors) with effective and incredibly smart humor. It knows that the best comedic bits come from reality, even routine. It mocks life, sex, intimacy, and we can’t help but laugh since we are part of (if not) the joke.

Very few films achieve exactly what they mean to, and this chapter of the series is incredibly successful in both standing on its own as in bringing a sense of closure to a story. What happens after the veil of novelty fades in a relationship? Can there be romance between two people that know each other too well? The questions that this film raise, are not necessarily answered by it, but interpreted by us. It takes a smart film to make you think, and this is definitively one of those cases. Even if romantic love is supposed to be blind, we still need words to figure out what it ultimately means to each of us. Because our notions of what love and relationships stand for are nothing but individual. And words the ultimate bridge to interpret them and try to connect to each other.