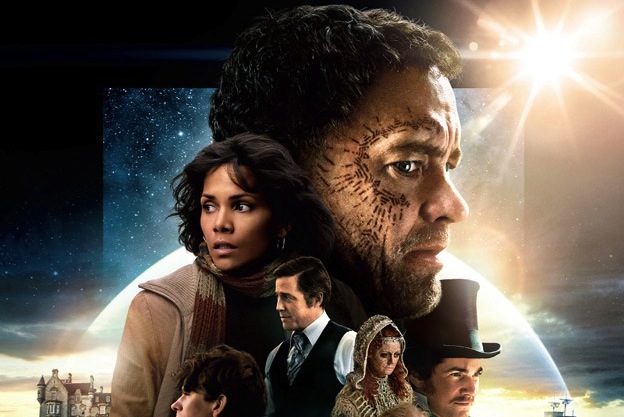 Sometimes movies show nothing but people running around with guns and car chases. Sometimes they are about much more, and can inspire us and make us take a look at life as a journey. CLOUD ATLAS manages to do both: a beautiful film that explores the human experience and existentialism through history, action sequences, and well, laser guns (it’s a Wachowski’s film after all. The prolific siblings have proved that no one can channel Buddhism concepts through a futuristic lens like them). But don’t get me wrong, this film is not The Matrix, it takes an slower yet more profound path into the limits of physicality and spirituality, how we are all connected, and how our decisions always affect others.

This time directors Andy and Lana Wachowski are also joined by Tom Tykwer (RUN LOLA RUN, a must see for any film lover) in what looks like an almost impossible task to bring to life: we follow not one but multiple story lines, that are utterly connected through a net of events and characters that keep bumping into each other through different times and eras. And what if on top of that those characters were played by the same group of actors in different roles? Just by this premise alone I think this is one of the most ambitious projects we are gonna see this year, if not in a while.

It features an all start cast: Tom Hanks, Halle Berry, Jim Broadbent, Hugh Grant, Jim Sturgess, Doona Bae, Ben Whishaw, James D’Arcy, Hugo Weaving, Susan Sarandon and Keith David, among many others. Long list right? well this movie deals with the task of putting each actor in at least two different roles (Hanks and Berry do up to six each), meaning you are gonna see elaborate prosthetic and make up work in every single scene, including a particular beard that’s the most peculiar thing I’ve seen Mr. Hanks ever wear (and I’ve seen all of his films).

This movie also looks beautiful. I’m particularly keen of the Wachowski’s sense of aesthetics, in this case evoking that utterly cool black/white leather/plastic Avant-Garde look that made the Matrix trilogy of films so visually iconic, contrasting it with old school European settings and even natural landscapes.

But this film is not about the visual spectacle, even though the story is told in a very epic manner with massive amounts of CGI. This is a human and existentialist story at its very core. Is it for everybody? It depends. As much as I enjoyed it  on a personal level, it is quite lengthy  (172 min running time) and sometimes complex to follow along, until the very end when everything ties up together.  But besides those elements, I was blown away and moved on an emotional level at the same time.

Its premise, as grandiose as it sounds, can be applied to our everyday life: Everything is Connected. We are not isolated islands as individuals, it is through our relationship with others that we grow, learn and evolve as beings, and our actions impact the life of others as well, in a permanent flow of cause/consequence. In Buddhism this is defined as Samsara or “Cycle of Life”, and going beyond its religious connotations I find this concept on itself to be fascinating. Just look at the Internet and how the sense of Global Community has drastically changed over the last few years. Someone posts an article online and it can be read all over the world, our thoughts can be shared with someone who lives in a Continent opposite to ours, instantly. As humans our sense of distance has evolved permanently.

Beautiful, inspiring, moving, Cloud Atlas goes beyond its stunning appeal to become a meditation on life, and the always evolving relationships we share with others. Despite our differences there are things we will always have in common: we all dream, fear, love, and experience the world in our way, even when seen through different eyes, we ultimately share it. We all are, in a way, connected.