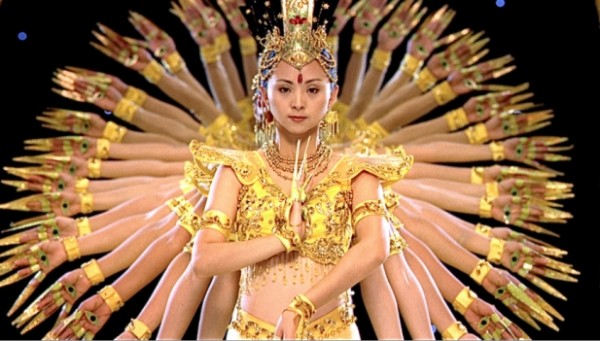 SAMSARA means “continuous flow”, defined in Buddhism as the cycle of life. And I can’t think of a better name for this film: is a visual, non-linear, exploration of the human experience. Sounds a little vague? Maybe, but everything it is aiming for as an stunning spectacle it achieves and goes even beyond. This film, more than a story or even a documentary, is an experience.

From the producers of BARAKA, Ron Fricke and Mark Magidson, it proves once more sometimes the best stories are not the ones told, but the ones implied and perceived according to the eyes of the beholder. Because Samsara has no dialogue, neither follows a plot line. Is a visual and musical journey through hypnotic imagery that feels more like a dream than a cinematic piece.

Shot for over five years in twenty five countries, this film glides from showing us breathtaking views of the most recondite places in the world to everyday urban life scenarios, its people, its traditions, sometimes its chaos, somberness and misery, without loosing the sense of beautiful  visual poetry that ties all these elements together as a whole. Shot in 70mm film, the result is a welcomed answer to CGI-special effects numbed eyes: nothing but masterful photography in movement. I recommend seeing it in theaters if possible, specially in the 4K digital projection available in some cities.

In an industry (film) filled mostly with big budget grossing blockbusters, sometimes is easy to forget that cinema is considered also the 7th art form. And like effective art, this film becomes a journey that  brings intimate and personal questions out of its audience : what are the values of family? how “lost” and dependent of technology have we become? what does tradition mean in the modern world? what’s beauty? where do we stand and what is our place in the world?

Timeless, beautiful, entrancing, and haunting, Samsara is a rare jewel of cinematography that reflects the adjectives of its subject matter: humanity, the rational experience, and ultimately, us.