Comet TV: May – Jason and The Argonauts Prize Pack Giveaway 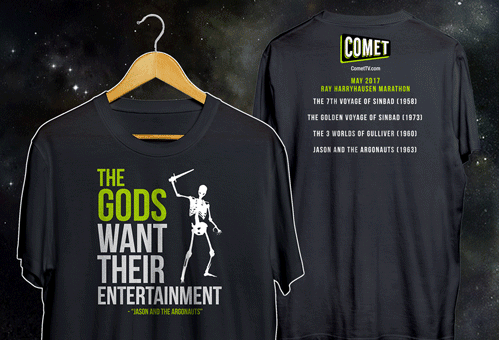 Ray Harryhausen, who pioneered stop motion and visual effects for such films as Jason and the Argonauts, The 3 Worlds of Gulliver and The 7th Voyage of Sinbad, is being honored by Comet TV this month. This is a custom designed limited edition T-Shirt that you can only get via this promotion.

To enter: send us an email with your favorite Ray Harryhausen scene. You can also enter via Twitter, just make sure to mention the site @shemoviegeek in your message. The contest ends on June 6th 2017.

Jim Henson. George Lucas. David Bowie. When these three legends got together in 1986, an all-time cult favorite was born. We are, of course, talking about the ‘80s fantasy masterpiece known as Labyrinth. It’s one of those rare films that seems to get better each time you watch it.

Each household is only eligible to win a May COMET Prize Pack via blog reviews and giveaways. Only one entrant per mailing address per giveaway. If you have won the same prize on another blog, you will not be eligible to win it again. Winner is subject to eligibility verification