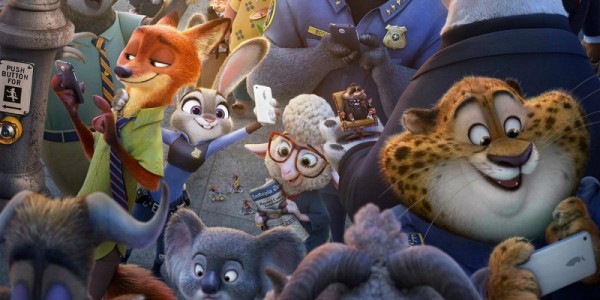 Going into Zootopia I wasn’t expecting to be deeply moved by a film starting talking animals. It is one of those rarities that makes you laugh out loud and immediately makes you insight into what you saw. As an animated family film is effectively didactic, specially for adults.

We don’t tackle themes of diversity in kids oriented entertainment enough and as often as we should. Probably the last successful (and best) effort came from the ingenious work of Jim Henson. By making his characters so different he made us enjoy their uniqueness and coexistence. He also famously created Fraggle Rock to teach young audiences about social conflict and classism to “prevent future wars”. Zootopia follows that same principle: tolerance is better understood and embraced through humor.

This hugely entertaining film is filled with the same brilliant concepts and ideas that made Henson’s work so universal and timeless: smart jokes that work differently for both kids and adults, mesmerizing visuals, ingenuity and the conveyance of poignant messages through palatable imagery and situations. Female discrimination at work is definitively easier to watch when it happens to a bunny.

And as the film went along, I found myself relating to this bunny quite often. Her sense of wonder moving into a new city was delivered in a way that left me in awe. The world of this movie is absolutely breathtaking. From the major “cityscapes” that resemble tropical jungles or deserts, to the painstaking attention to even the smallest details. She’s fascinated by everything she discovers, and so are we.

At the same time, as wonderful as this new place is, it brings a whole new set of challenges. She doesn’t quite fit everywhere (ingeniously showcased by her small size), she’s threatened instead of encouraged at her profession because of what she is, she’s made fun of, discriminated, and so forth. This also happens to other characters that surround her, leading to brief but heart wrenching scenes. I found myself quite moved at some of those, and thank the filmmakers for not shying away from them.

The voice talent is superb: Ginnifer Goodwin as the sweet courageous Judy Hopes is terrific, and plays the perfect opposite to the delightfully snarkiness of Jason Bateman‘s Nick Wilde. Idris Elba was just fantastic as an intimidating Chief Bogo. The whole cast is phenomenal and wonderfully diverse: the main theme is sung by Colombian singer Shakira, who also voices a pop star/activist named Gazelle.

Zootopia is a film I can’t encourage enough to see. It’s very funny, charming, visually stunning and carries what I consider an urgent message. Maybe we can’t still prevent wars only with entertainment as Jim Henson intended, but we can teach a lesson of two about being nice to others through it. Including bunnies.