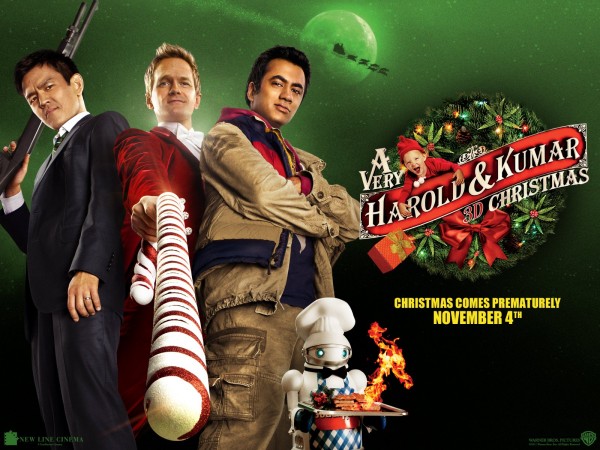 A very Harold and Kumar Christmas shows their main characters reunion after being apart due to different life style choices: Harold is living the suburban dream: married to Maria (played by Paula Garces),working on Wall Street and owning a beautiful house. Kumar has being dumped by his girlfriend, living in a crappy apartment and being high all day. And as soon as Kumar goes over to deliver a gift, and  burns by accident Harold’s father in law (played by an always charming Danny Trejo) Christmas Tree, they need to replace it and shenanigans undue.

My issue with this particular sequel is that what I enjoyed the most from the previous ones is missing: both of them just being high and enjoying each other’s company .It happens only a particular scene, a highly enjoyable claymation sequence, but then it just goes away again. Harold plays the “straight” man who’s constantly Kumar’s victim, and that hurts the film in my opinion. Stoner films are all about being loose, almost oblivious about what’s around you, a sense of escape and joy. Not the case here, where the tension between both of them kept taking me out of the jokes, even though there are some conciliatory moments at the end. But even so, there are some true laughs here, a brilliant cameo from Neil Patrick Harris (who never disappoints in my opinion) and a little girl highly intoxicated, who gets most of the laughs in my opinion. Also, the 3D, nice looking and exploited in a delicious way. You have everything trowed at your face in the most gimmicky and self aware fashion, from eggs to pot smoke, you name it, which makes it another character instead of just the media. Not a bad film, you get to laugh at points of it, but miss the chemistry and vibe between the two main characters from the previous films, and unforgettably lacks the comedy that comes from two guys that are high and loving it. Verdict:  a movie with a heart, about stoners that are almost never stoned, who’s always self aware and has fun with it, but with jokes that don’t deliver at all times and are, well, just half baked.