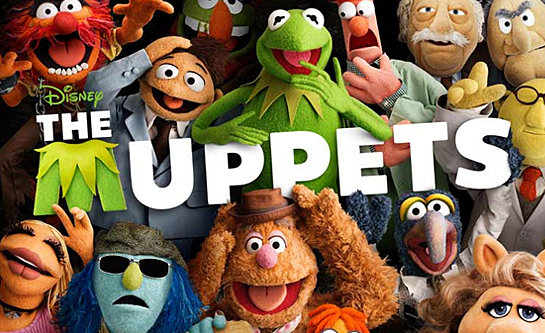 You can tell from the opening credits of this film that Jason Segel is a big Muppet’s fan and grew up with them. The script (his)  knew exactly which notes to play to send us all old Henson’s fans into a nostalgic haze: from recreating the classic Muppet’s Show opening (which sent a huge smile to my face) to keeping the film angles the way we are used to, only seeing the puppets from the waist below at most times, which is one of the reasons why this movie worked so well for me.

When you have such a beloved franchise that have been around for so long, it can be hard to bring another chapter of its story to the table, but this movie does it in an organic almost effortless way. It knows its characters very well, and doesn’t treat them as “versions” of themselves, in it Gonzo is still  in love with a lady chicken. Also the film is self aware in such a delightful way, someone at some point would look at the camera and talk about the film’s budget while there’s an explosion in the background, or my favorite constant joke about them not being “famous” anymore and young people not recognizing them. Segel and Adams are they usual adorable, and fit perfectly with the tone of the film which is flawless, with silly jokes and even songs, which I’m glad they continued doing since it matches the previous films. The cameos are actually welcomed this time around and are plenty, from Sarah Silverman to Neil Patrick Harris, even Jim Parsons who appears in a hilarious segment.
This movie was made in the exact manner it should have being made, Segel and director James Bobin (Big) knew what they were doing and did it well. It is such a nice experience watching a movie with no crazy special effects these days, just cute jokes and a nice story. Who knew such a vintage technique as puppetry in this CGI filled era would be, well, refreshing and nostalgic at the same time. Henson’s legacy is safe.

One thought on “The Muppets Movie”