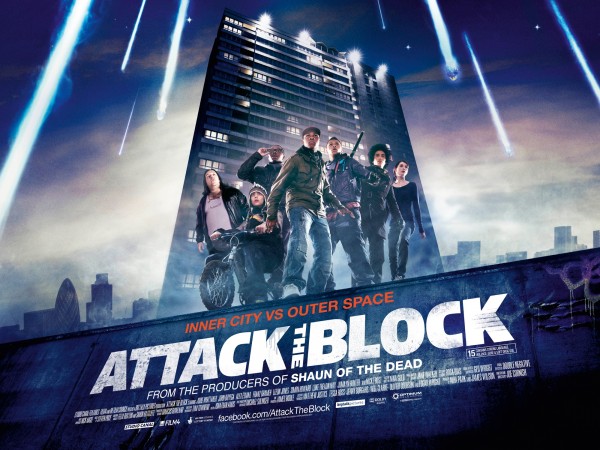 Blend: Amblin nostalgia, kids you
don’t mess with, cool looking aliens, Nick Frost and a great
soundtrack. You get: Attack the Block. This is Joe Cornish’s
incredible directorial debut and one of my favorite films of 2011.
Just imagine the concept of an alien invasion in a lower class
section of London, and who’s there to witness this? An intimidating
(yet funny and charming ) group of kids who know a thing or two about
defending themselves giving their life style. Instead of running away
in fear, they grab everything they have at their reach to fight back:
from bats, to chains, fireworks and even a Samurai sword at some
point.

The contrast of the reality of the housing project, which is
not only grim, but filled with crime, violence and drugs, and these
stylish looking aliens chasing kids around it, I find just brilliant
and fascinating. The kids act and talk like kids, and even throughout
the madness and violence that surrounds them, they are so likable and
funny you can’t take your eyes away from them. I specially enjoyed
John Boyega performance as Moses, whose eyes goes from aggressiveness
to complete fear back and forth in a matter of seconds.

The creature
design is so effectively uncanny, you can’t see their features which
is pretty unsettling, only shiny and scary glowing teeth, a very
interesting look. We have our characters riding their bikes and
running up and down stairs to an amazing soundtrack by Basement Jaxx,
which is incredibly eclectic, going from being fully electronic and
hectic, to total muted suspense mixed with old school bits and
sounds, is almost as it it was another character in the film. It is
from the producers of Shaun of the Dead, and by the moment I found
out Edgar Wright and Nick Frost were on board, I knew I was in for a
treat, and it totally paid off.

Alien invasion done the right way:
funny, thrilling and completely entertaining, Attack of the Block
sets the bar high for upcoming sci-fi films, in a unique and utterly
cool way.