Furious 7: A Ride Full of Action, Fun and Yes, Tears. 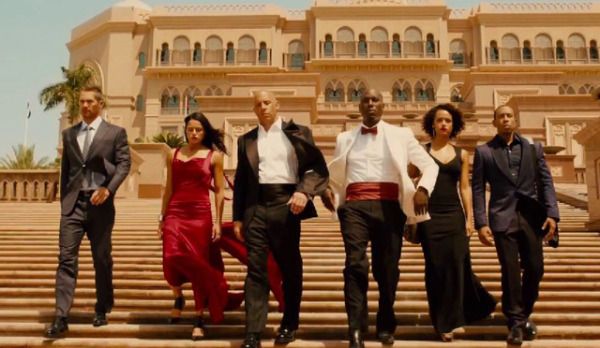 The Fast and Furious franchise had never suffered from an identity crises. And its 7th installment is no exception to the delight of its fans: stunning cars, hot girls and jaw-dropping action sequences. But how do you deal with making a film of this kind when one of his most beloved stars passes away? It’s a daunting task, and even as a moviegoer I was unaware of how the film would play under this circumstances. Even if at some points I could not shake the notion of the reality behind the fun, luckily it still felt and looked just as its predecessors, even if a little more sentimental at times.

You could never tell director James Wan has a horror only (yet solid) background (Saw, Insidious). The premise of these features has being going bigger each time and this entry is no exception: from flying cars to destroying an entire building (or two…or three) in a matter of minutes. The thrills are non stop, at an impressive 2 hours 17 mins runtime the film never drags. Even if some of the scenes feel like deja-vu, they are so well choreographed an entertaining that they serve as a reminder of the basics of its premise: gorgeous girls that can kick some serious butt, impressive car stunts, and of course, the bromances. This time we have Jason Statham fitting just right in, and popping out of nowhere every few minutes like Droopy in that “Hello Joe” cartoon*, with his Transporter face on and armed to his teeth. And there are also some fun cameos I wouldn’t dare to spoil as well.

If the special effects in the action sequences weren’t impressive enough on their own, when you take in consideration that Paul Walker couldn’t finish shooting half of his scenes for the film it just takes things to a new level. By using CGI and two of Walker’s brother as body doubles, they were able to complete the missing shots, in a seamless and outstanding manner. This served to round the actor’s appearance and to give the character a well deserved farewell from the series, which both fans of the films and Walker would appreciate.

Furious 7 is a proud son in a quite long family: it’s fun, fast paced, diversity friendly, self aware, thrilling, and in this latest entry, also quite emotional. This franchise loves both Brian the character and the actor who played him, and the way they handled his departure is very effective (yes, you might cry. I did). But if one thing is for sure is that the legacy of Walker and his contribution to the series is stronger than ever. It was him and Vin Diesel who in 2001 started what would become one of the highest grossing franchises in history, creating an immediate (and worldwide) following. And with its 8th installment already in production this is a machine that ain’t slowing down anytime soon.

* Just because I love Tex Avery so much, I couldn’t help to show you the Droopy cartoon I mentioned on the review. It’s called “Northwest Hounded Police”.