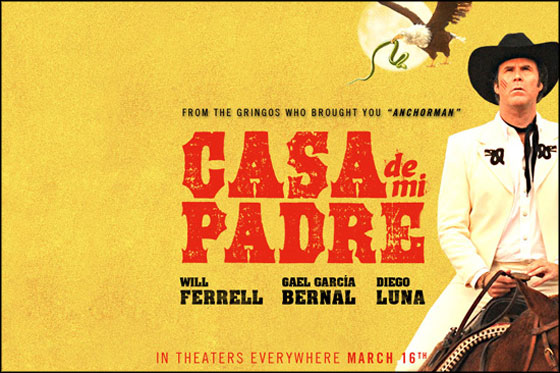 This film is as polarizing as its protagonist Will Ferrell, even though this is not your typical “Ferrell” movie at all. In “Casa De Mi Padre” he is  a welcomed addition to a production that is very unique and “niche”, to an extend that might confuse and even alienate audiences who are not familiar to the source material this film is mocking.

Imagine old Mexican films from the 70’s, even “novelas”, amped  80% and you get the tone director’s Matt Piedmont is aiming for.

I really enjoyed this film, but hearing other critic’s comments and a very low opening weekend gross ($2.2 M), tells me very few actually got the “joke” this film was trying to tell.

I’m of Latin descent, and even though I reside in the U.S., I grew up in a household where “novelas” were watched on a daily basis, and still are to this date. If you are not familiar with them and its contents, just imagine your regular soap opera, but three times more “intense”, with curvy women in very tight clothing, lots of melodrama and yes, in every single episode someone gets slapped in the face for no major reason.

This film parodies all the elements of early Latin and Mexican productions in a deliciously shameless way: the low production values (just keep your eyes on the background elements, there are lots of visual gags), the “over the top” acting, gratuitous nudity, and the usual crossover actor that doesn’t speak Spanish, in this case represented by Ferrell in a hilarious manner.

Who actually stole the show for me were Diego Luna and Gael Garcia Bernal (two very talented actors I strongly recommend checking their previous work). You can tell they are having so much fun playing the “bad guys”, and this just resulted in amazing memorable performances.

I saw this film in a theater where I could tell most of the audience was Hispanic, and they laughed at all times, they “got it”, and so did I. Casa De Mi Padre is a smart and unique joke, unfortunately making fun of a way too unfamiliar subject to many. Definitively not all jokes can be universal.