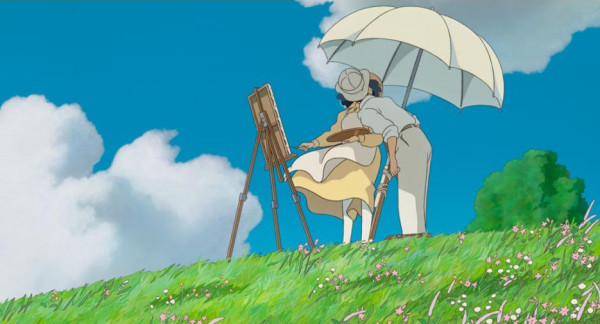 There are few times when you can say the most riveting character on a film is invisible. Or that the imperfections of a piece of art makes it just so more beautiful. That’s why the legacy of Hayao Miyazaki’s body of work in animation is so relevant, and his last entry The Wind Rises one of the most perfect ode’s to an author’s career I have seen on cinema. Not only its subject matter reflects the passion for creativity and invention of its author, but also how some things can only exists though devotion and sacrifice of individuals, and those around them. This is the way not only the beloved animator says goodbye, but also one of the most heartfelt depictions of how the creative mind thinks, dreams, obsesses, creates and then just waves goodbye to its creation, being it a plane in the distance or a life long career.

The story follows Jiro, a fictional character inspired by two actual men from the same era: Jiro Horikoshi, designer of the “Zero Fighter Plane” and Tatsuo Hori, a poet and writer. The film depicts historical events in Japan such as the Great Kanto Earthquake of 1923, the Great Depression, the tuberculosis epidemic and war. And even throughout misery, somehow this story is nothing but hopeful about humanity: a natural disaster brings the hero out of a young boy, friendships solidify through necessity, creativity reigns over despair.

The films visuals are mesmerizing as well. There’s something stunning about Miyazaki’s treatment of 2D animation: the way full crowds are brought to life with only few lines, how handwriting fills the screen for moments at the time, how characters move in a such an imperfect, flawed, such approachable life like way. And yet there are some others where the wind moves though man’s hair in such a manner you almost can’t conceive how that was made possible just by a sequence of drawings. There’s a sense of “aw” in his craftsmanship that I find nothing short of inspiring and breathtaking, and in this feature there are sequences that are just spectacular, specially those featuring Jiro and his chimeric mentor aeronautical engineer Gianni Caproni.

The Wind Rises is a story about creation, devotion for one’s passion, creativity, and the “thereafter” once we look back at the results (and consequences) of our actions, and how ephemeral the good and bad in life can be, and what really lasts over time. And unlike the wind that comes and goes, in some cases, like in Miyazaki’s legacy, some works of art are meant to be just timeless, and to the creative and curious kind, permanently inspiring.

I wrote this review originally for ScreenInvasion.com. You can find it here: http://screeninvasion.com/2014/02/the-wind-rises-movie-review/