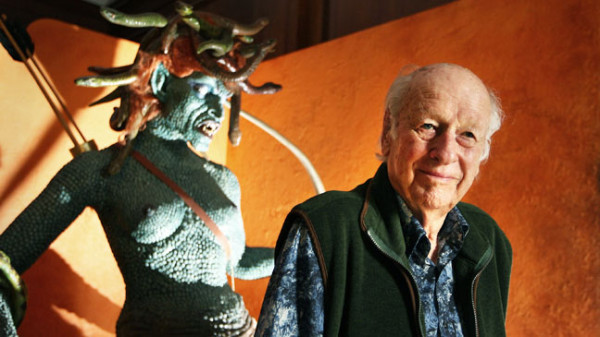 They say “Name-dropping is everything in Hollywood”, so what if I told you there’s a name that not only is mentioned by filmmakers like Steven Spielberg, George Lucas, Guillermo del Toro, James Cameron and many more, but it’s also responsible for inspiring  their careers? That name is Ray Harryhausen.

Written and Directed by Gilles Penso, Ray Harryhausen: Special Effects Titan is the ultimate documentary about the prodigious Filmmaker/Animator, and a moving and deserving homage to one of the biggest talents in the special effects industry, who not only created some of the most visually iconic moments in cinema, but revolutionized the way films were made and enlightened the imaginations of generations to come.

If you were a kid who, like me, was obsessed with movies and animation, you might recall the sense of wonder watching reruns on TV of films like The 7th Voyage of Sinbad or Clash of The Titans and admiring their unique look and beauty. Still to this date, the skeletons sword fight scene from Jason and the Argonauts is one of the most technically brilliant animated sequence I’ve ever seen. And it was made over 50 years ago.

But I wasn’t the only one: the interviews with A-listers is just fascinating. From John Lasseter including many nods to him on Monsters Inc. to candid and heartfelt moments about the big impact he had on the careers of Randy Cook, Rick Baker, Robert Zemeckis, Peter Jackson, Joe Dante, and many more. The list is as long as it is impressive.

But definitively the highlight of this feature are the interviews with Harryhausen himself. Shot over the course of five years, you don’t have to be an special effects fan to be in awe by the stories and the process behind the making of his films: from only eating celery and carrots on his lunch breaks while animating the gorilla in Mighty Joe Young to “get into character”, to how the giant octopus from It Came From Beneath the Sea had to become a “sixtopus” due to budget restrictions. He not only had to come up with the term “Dinamation” (described as “Dinamic Animation for Adults”) to differentiate his method from the one used on kids films back in the day, but also created an impressively effective projection technique to compose his stop motion shots with live action footage.

But besides his impressive resume, the people he influenced and his endless talent, the part that moved me the most was the man himself. He never called his creations “monsters”, he would call them “creatures”, since to him they were never evil, just misunderstood. He would ad humanoid elements so people could feel for them, since “that’s what you’d remember when the movie is over”. About C.G.I. he said: “It’s just another way of making films” and that he would prefer to use puppets since to him “when something looks “too real” it looses fantasy”. In an era where we have become C.G.I.-numbed already, I wish more directors thought the same way.

Ray Harryhausen: Special Effects Titan is not only a loving homage to one of the greatest talents and innovators in the history of film, but an introspective look about what it means to be a pioneer in an unforgiving industry, and ultimately a real artist. Because his imagination had no limits, he was capable of inspiring millions into believing his creations were real: from flying saucers destroying cities, to mythical creatures battling humans.  And that’s the real measurement of someone’s achievements: that’s not his face or his name what we will remember from him, but his talent, and ultimately, his legacy.