THE WAY, WAY BACK 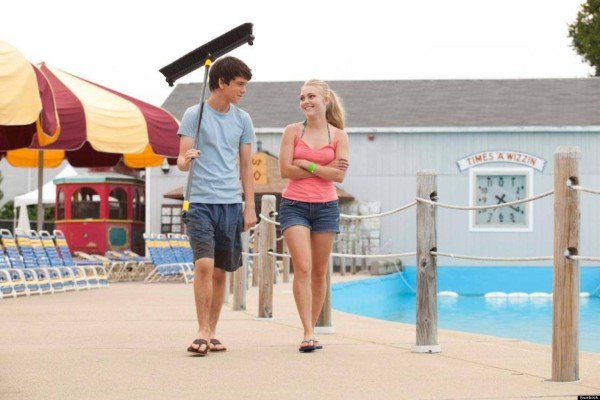 The opening sequence of The Way, Way Back is heart wrenching to watch. It only involves dialogue, a grown man asking a teenager : “Duncan in a scale from one to ten, what do you think you are?” Duncan says: “A 6?” to what he responds: “I think you are a three”. And this was actually said to writer/director Jim Rash, who revealed in the USA Film Festival that there’s more than one real life experience included in his directorial film debut. And you can tell, some of the scenes in this film feel very intimate, even in the comedic bits there’s a sense of ” this might have really happened to someone”. Because at the end of the day, who had it easy growing up? Which is probably why films about how hard it is to become adults will always be around.

It was co written/directed by Nat Faxon, and starts Liam James, Anna Sophia Robb, Amanda Peet, Rob Corddry, Alison Janney, Maya Rudolph and the always incredible Tony Collette as Duncan’s troubled mother Pam. Steve Carell plays an unsettling (at least to me, used to seen the actor in lovable roles) Trent, Pam’s boyfriend and constant bully of her son. But probably my favorite performance comes from Sam Rockwell, as the owner of a run down water-park who becomes Duncan’s friend.

As a coming-of-age story this film totally works: it has humor, drama and all the nostalgia and melancholy of the ups and downs of teen angst. The acting is great, and I specially enjoyed the chemistry between James’s “Duncan” and Rockwell’s “Owen”, seamlessly balancing comedy and drama in the situations throughout their relationship. But as much as I enjoyed the film, to me it was hard not to compare it to efforts like Adventureland, in the sense that it shares a lot of similar elements to other features of its kind: a taciturn teen, who likes a girl with a sad story, living with far from perfect relatives, finally finding guidance/parental figure befriending an adult. As much as this script is original and heartfelt, it was hard not to find its beats somehow predictable, since we have seen them in the genre more than one time around. But it being the directorial debut for Faxon and Rash it was nothing short of an impressive, very fun and ultimately sweet achievement, which will resonate with audiences who have been a “Duncan” at some point of their lives. It definitively did with me.

The Way, Way Back is a reflection of how different we perceive ourselves and our relationships throughout our lives, and the role of family and friends in figuring out how to overcome our “teens”, or even adulthood. And even though life never ceases to be scary, disappointing or intimidating, those around us can help us achieve (or at least feel) the possibility of becoming a ten.