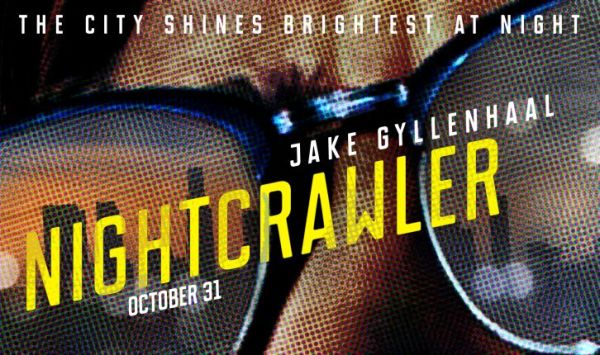 I had the pleasure of sitting down with Jake Gyllenhaal, Rene Russo and director Dan Gilroy for their latest project Nightcrawler. The film is absolutely fantastic and Gyllenhaal’s performance is one of the best of his career in my opinion, it wouldn’t surprise me if it lands him mayor award nominations. Here is what they had to say about the film:

This kind of “battle” for news that I’m sure goes on every market, no matter the size, but this film could only have been made in Los Angeles because of the sculpt of the city and because is the number 2 market? Is it just the perfect place for it?

Gilroy: “You would find stringers or “nightcrawlers” in every city in the States, but Los Angeles predominates because it is so large geographically and L.A’s local stations at 10 o’clock let their union crews go because they don’t want to pay triple time, so there’s a void for this freelance people to come in. L.A. at Nighttime can be a violent place, a lot happens, so there’s people out there trying to catch it. All these elements intersect for L.A. to be I think the “capital” for this kind of stuff.”

You have to be pretty close to the flame to know about nightcrawlers, what did you want to say?

Gilroy: “There’s a number of things I want to say. I used to be a journalist, I worked at Variety for four years. A while ago I was in New York, but then I moved here and I heard of this “nightcrawlers” world and I was fascinated by it from a screenwriting standpoint, and then when I started plugging in local L.A. journalism (which I watch a lot of) I was a aware of the persuasive narrative of fear, but I wasn’t aware of the real narrative which is urban crime creeping into the suburbs and trying to make people really freaked out by that . In looking at that, one of the things that I wanted to say and one of the things that organically comes out is that when people watch it is we don’t try to pass them a moral judgment of what they are looking at, we show what happens in local news but we don’t want to say that is ultimately bad, people by the end of the film might think “ I’ve watched that on news, I am part of this whole mechanism, I am the end user of the product. And that doesn’t make me part of the problem, makes me part of the system”. And we all might say by the end of the day “what is it about us that attract us to this kind of images?”.

Is it nice shooting in L.A. for you?

Russo: “I love shooting in L.A. We had the good fortune to be able to shoot in L.A. And the movie wouldn’t be the same if we didn’t shoot here.”

Did you have the chance to talk to any news anchors?

Russo: “I usually don’t do that as an actress. I really didn’t have Nina for the longest time, I didn’t know who she was, if I can’t use my own colors and life experiences I don’t know where to go, and I don’t think I am naturally a cold heart b****, who is going to get whatever I wanted at any cause, but I have been desperate, and I have crossed moral boundaries in my desperation, so it wasn’t a stretch for me to understand Nina. She is older , she could loose her health insurance, she is alone. I didn’t want to judge Nina for any of that, just like I wouldn’t want to be judged for the moral boundaries that I have crossed myself , and they have always been because I’ve been scared to death. Some people do it out of greed, some out of fear, some maybe out of both, but for me that’s how I found Nina, she is on a desperate place. Having said that, is not like she slipped in it comfortably, once you cross that boundary, and she made a pact with the devil, you suddenly go further down that road.”

When it came to piecing together Louis did research any motivational speakers for the part?

Gyllenhaal: “The hand gesturing, I don’t know if you have met Dan Gilroy, he uses his hands a lot, he always stands very straight, there’s something about him, his words , but no, I didn’t study anybody else to guide me there.”

What about your hair? I noticed that there was something transformative about it. Was it something you decided reading the script?

Gyllenhaal: “That happened on the day. I came up with the idea, there was a moment when my hair was all in my face filming, and I just thought, so often when people are driving it is so much dangerous when people are driving with their knee, wouldn’t it be great if I’m doing it while pulling hair up? And there was something about it , where I felt he was a ninja, it just came out and Dan just loved it.”

Can we talk about the look of your face? Because it looks so different.

Gyllenhaal: “I have an extraordinary make up artist, we worked on the film Prisoners, so Donald who did my make up, I also worked on my character with him which was very important, he was helpful there, we did subtle things, one of the biggest things was that Louis only really sweats once in the movie, and that was a very particular thing that we talked about often, because at the times he is giving his speeches or when he is under pressure with the police officers, he did not sweat, the only time when he sweats is out of excitement, when he comes out of that house, when he is driving away, those are the only times when you see him sweaty, because he is psyched, and every other exchange there’s like a confidence to him , so those type of things and me loosing weight, that was just months getting to it. As we were shooting I’d just run to set, I’d run all the time, and at some point I’d just run around Whittier Park all the time, 8-15 miles a day, picturing myself like a coyote, that’s how my face just changed.”

The way things are, when the film comes out you will be asked about how we cover stories and how we pull out information, are you comfortable being put out in this position? Have you thought about what you’d say? Obviously it’s a work of fiction, but is it reality in there?

Gyllenhaal: “My form of communication is through the movies that I make. I think this movie is really fun to watch, and entertaining, as well as I feel is sort of a commentary, and when you get those two things into one movie I feel that’s the typo of movies that I want to make, and I believe movies are political no matter what. I don’t think any story is good unless there’s some indictment to it. Dan Gilroy has a point of view, and I think he created this character to shine a light on the fact that I don’t think a character as Lou would exist unless we really created him. Some people (that do work on the media) that have seen the movie come to me and say: “I would buy the footage that Lou brought in”, that’s fascinating! But at the same time is true, we don’t want to read half the things we have to read, and I’m sure you don’t want to cover it, but is important that people know it . I’ve been moved by the media, and I’ve been disgusted at the same time, and I think that’s what is beautiful about the job that you do. We are all part of it. And I feel the same way about movies, movies do that to me too.”

I originally wrote this article for Screeninvasion.com. You can find it here: http://screeninvasion.com/2014/11/jake-gyllenhaal-rene-russo-dan-gilroy-discuss-nightcrawler-los-angeles/