5 Best Things About the New GHOSTBUSTERS 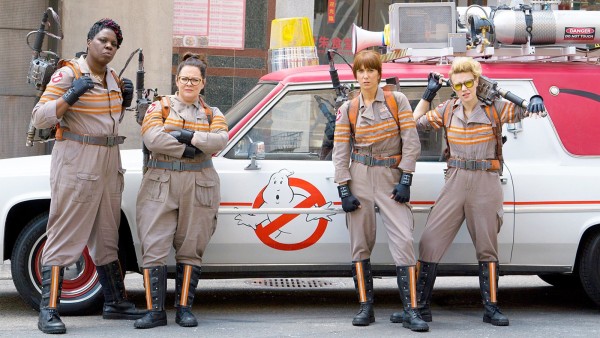 Just like with The Heat or Spy, we have the sense that director Paul Fig assembled a great cast of comedians he likes to work with, who just happened to be women. There are no allusions at the leads’ genders or soapy romantic sub-plots: just four smart, capable women being baddasses. Bonus: Chris Hemswoth plays a “himbo” as a direct reference to the role reversal in the film (and he is fantastic in it).

2-The Performances are an Absolute Blast

If you haven’t seen Kate Mackinnon in SNL, you have missed probably one of the funniest women in comedy nowadays. Here she plays a mad genius in a madder way, with crazy facial impressions and one liners that steal the show once she’s on screen. All the other ladies are fantastic as well: Kirsten Wiig as a conservative scientist with an obvious crush on their new receptionist (Hemsworth), Melissa McCarthy (a personal favorite) in a more subdued role this time, leaving room to breath to the rest of the cast, specially to the delightful over the top Leslie Jones. The rest of the cast is also great, but I’ll let you discover who-is-doing-what in case you haven’t seen the film yet.

The main villain in the film is a nerdy guy who lives in his mom’s basement and hates the Ghostbusters…. impersonating basically every internet “troll” that attacked the film on social media. There are also direct references to negative comments on Youtube and Reddit, translated hilariously into the story.

4-It Is Its Own Thing

Yes there are nods and winks here and there to its predecessor, but this film never suffers from a personality crisis. It has its unique tone, and even when it’s following similar plot points at times, the resolution and reactions are (or at least feel) different this time. These girls are in control, are capable and are portrait more like action heroes than the guys in the original. Even the visual effects bring a new beautiful Neon-like look to the ghosts and creatures from the underworld.

This film packs laugh by the second, from visual gags to the great overall performances. It’s goofy in tone while reaming pretty smart about who the jokes are aimed at. These gals seem to have fantastic off screen chemistry and you can tell: they go all out, and even crack each other up at times. Just stay until the credits roll and you’ll see what I’m talking about (and also to witness Hemsworth having a blast as well, in a “performance” as you have never seen him before).