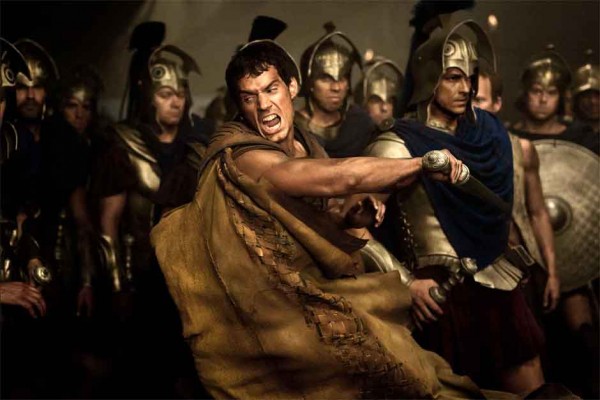 Imagine watching a beautiful painting, and all of the sudden discover is a close up of a dead kitten. There’s also a speaker attached to the back of it, which is playing a voice mumbling in mandarin, and you don’t speak mandarin. That’s exactly how I felt when I watched Immortals: a beautiful spectacle at times, which alternates with gruesome scenes and follows an incoherent script.

Directed by Tarsem, this movie follows how Theseus (Henry Cavill) is predicted by an oracle (Frida Pinto), to be the key to stop the evil King Hyperion (Mickey Rourke) from casting out the gods out of Mount Olympus and become master of the world. Easier said than done.The acting in this film is no good, and when you have way too many cheesy one-liners that doesn’t help either (some examples include: “Let’s write history, with blood!” and “Let me en light you about this!” followed by a guy actually being set on fire). If that wasn’t enough, this movie has some really disturbing scenes, and don’t get me wrong, I’m a huge gore fan, but the brutality here feels sadistic and gratuitous, when a man get’s his eyes poked they need to do so on an extreme close up, with 3D blood oozing at you from his empty eye sockets, and it just goes worse from there. The only thing worth your while in this film is Tarsem’s unmistakable eye for cinematography, some scenes you feel you could  just print and hang on a wall as artwork, also the depiction of the action scenes is very fun to watch, here you can see his background as music videos director exposed. The look of it feels very stylish, if you notice there’s a “Sea life” theme all throughout, from beautiful shots of the ocean to headpieces shaped like seashells and even crab claws like Hyperion’s. The 3D is also used in interesting ways at times, giving you a sense of depth of field , when it’s not busy throwing spears and blood at you. I cannot be more disappointed with this film after the director’s previous effort The Fall, one of the most visually stunning films I have ever seen, which actually has a plot and became one of my favorite films of 2006, shot on 26 locations over 18 countries, very unlike the CGI fake look we get all along Immortals. But let’s face it: there’s an audience for this type of films, even being as mediocre as they are, most people just enjoy the visual feast without questioning what’s actually going on, or why they actually deserve a better movie in general. So, unfortunately, movies like this will never die.