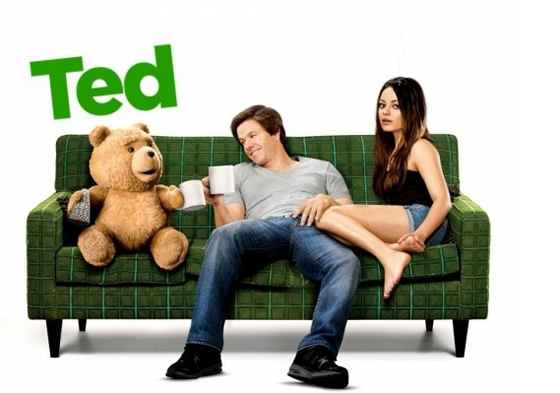 Don’t be fooled by its simplistic premise: like an old school video game that doesn’t look like much until you play it, Ted is not a film just about a potty-mouthed bear that smokes pot and like women. If you condense the film into a word: it’s Nostalgia.

Writer/Director Seth MacFarlane can be incredibly controversial among audiences, some just love everything he does, some others find his material too raunchy and simplistic, but there’s a lot more going on Ted that just fart jokes (which actually work this time).

I went to see Ted expecting to laugh at the idea of a Teddy Bear being raunchy, with jokes Family Guy’s style but R-rated. What I wasn’t expecting was two hours of pure celebration of the 80’s and 90’s, and a tag line: “What does it really mean to “Grow Up”? ”

But don’t get me wrong, if you are easily offended, take in consideration this is MacFarlane after all, and there are lots of vulgarity, strong language and debauchery. I don’t mind those when well executed, and actually loved the low-brow/self mocking sense of humor and often silly tone of it.

I also enjoyed that it explores how it is to become and adult when your inner kid still hasn’t gone away. MacFarlane is quite young (38 years old), and there were moments in this film that felt so personal that I couldn’t help but wonder  how many of them were actually about him and his own journey. I myself couldn’t help the biggest grin when in one scene someone shows a vintage Nintendo box, and moments like these just kept happening over and over.

The acting was good as well: Mark Wahlberg as Ted’s owner was hilarious, I find him to be a great comedic actor after “The Other Guys” and this film. Mila Kunis was her usual lovely and MacFarlane as the voice of Ted was a good choice in my opinion.

Ted is a very fun trip to memory lane, with vulgar (yet effective) sense of humor and even a heart at the end of it, with an special appeal to the “young at heart” like myself.

Growing up doesn’t necessarily have to do with age, and this film does a great job portraying that. I don’t have my beloved Nintendo anymore, but I guess until the next “blast from the past” comes around, my Playstation 3 will have to do the trick.