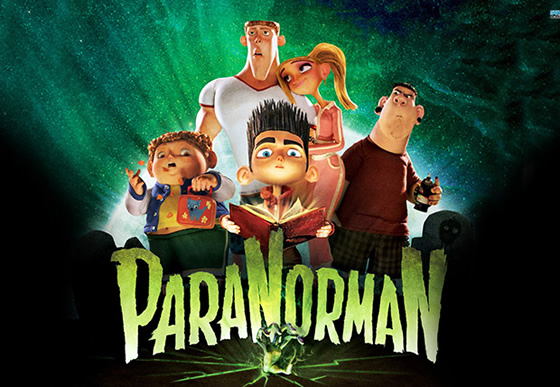 What does it take (and mean) to be “normal”? As this might sound as a one end question, PARANORMAN does a great work proving that standing out, even if not by a personal choice, might just be better (and harder) than it seems.

The latest effort from Laika Studios (Coraline), brings us the story of Norman (Kodi Smith-McPhee), a loner who is constantly bullied and judged in school and by his own family due to his ability to communicate with ghosts. No one else can see the world he lives in, filled with spirits both kind and spooky, but that doesn’t stop him from protecting his ow town from the big ghostly menace coming its way, even if it is by himself.

First time Director/Writer Chris Butler conveys a story about being an outcast that feels completely intimate, probably because the character’s ostracizing nature its based on his own childhood’s experience. He didn’t face dealing with the paranormal, but definitively knows what it means to be an stranger to everyone but himself. He would spend endless hours drawing in his room after school, (“basic escapism” in his own words) which eventually brought him to work in animation, something he “always wanted to do”. And you can tell, since this effort feels (and looks) as nothing less but a labor of dedication and love.

The film’s technical and visual aspects are astounding: this is the first animated feature to use a 3D Printer to bring characters to life. The puppets’s faces where first animated in the computer, and then translated to a machine that would mold them in sequence using fine lines of powder. After that each piece would be individually sanded, sealed and painted. It would take a single animator many moves and changes to each individual character to create one second of finished footage. Some scenes where so intricate and complex it would take over a year each to be completed.

But besides the artistry in the stunning visual achievement this films accomplishes, lays a story that is completely engaging, entertaining, funny, heartbreaking and inspiring. Norman doesn’t feel pity for himself, he knows better when it comes to facing the collective “mob” thinking, those who judge you out of ignorance, misconception and fear. And a gorgeous soundtrack composed by Jon Brion (Eternal Sunshine for the Spotless Mind) submerges you effortlessly into every chapter of the story: from the quiet melancholia Norman goes through in his everyday life, through humor and action, and the final grittiness of the parallel worlds he can’t scape from.

Even marketed as a “zombie movie for kids” it is nothing but a complex and thrilling homage to old school terror, with enough scares and nods to the genre to please old school fans of it.

Co-directed by Sam Fell, Paranorman is probably one of the most effective films I’ve seen so far this year. I could describe it as if someone placed George Romero’s walking deads in the middle of a John Hughes’s film. It proves that even when facing zombies and spirits, sometimes just being yourself can be incredibly more challenging, specially when dealing with the living.