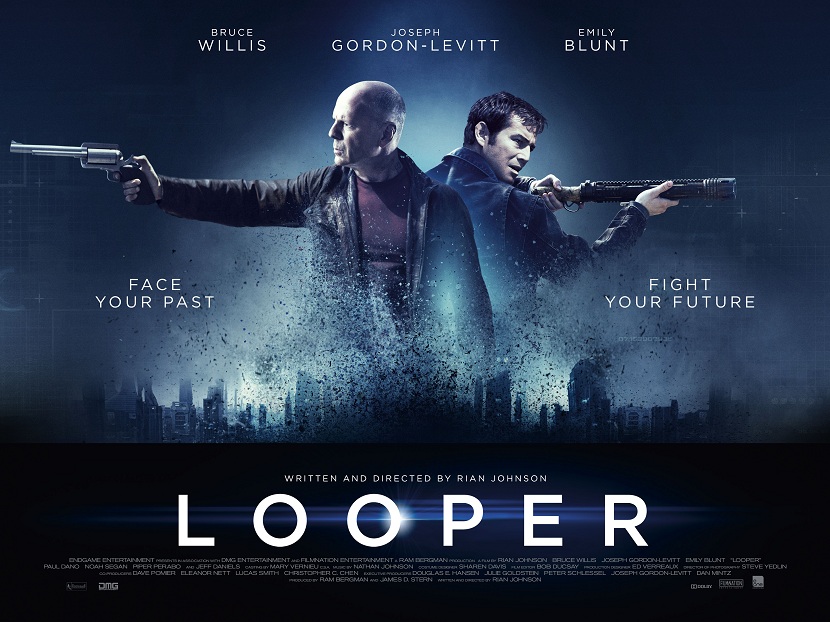 Past, Present, Future. What if the line that separates them became invisible? How would one affect the other? What lengths would you go to change your life?

These are some of the questions that Writer/Director Rian Johnson assesses in Looper, one of the most unique takes in the sci-fi genre I have experienced in a long time.

Thanks to the current prevalence of C.G.I., science fiction in film has become a synonym of  big budget productions, where the more spectacular you can make the “monster”, “the alien”, or “the far away planet”, the more people you are gonna have wearing their 3D grasses in their pricey Imax seats. And I don’t mean this in a negative way: those films are lots of fun in many cases.

But if you go back to the roots of the genre, its core is about formulating questions about our own humanity under extraordinary circumstances. And this film doesn’t need any intricate effects to submerge us in a story as elaborate in its premise as simple in the basic questions it implies: would a person change his/her life if possible? how does our actions affect others?

In this brilliant script, time travel is not a gimmick, is just the vehicle for a fascinating mind puzzle that challenges us as an audience from frame one. It reminded me of personal favorites such as Christopher Nolan’s Memento, where a talented director can actually treat us as smart viewers, hitting us with continuous and fascinating twists down a tight gripping rabbit hole.

And besides all the psychological acrobatics, lies a net of action sequences very effective and fun to watch. Johnson avoids the “over the top” glare of films where people runs around with guns to replace it with very stylish cinematography and well thought camera angles.

The acting is also superb, with Joseph Gordon-Levitt channeling Bruce Willis in an almost uncanny way when both actors appear together on screen. But the real surprise is newcomer Pierce Gagnon, who despite being very young steals every scene he’s in, and who I can’t wait to watch in any future projects.

Looper is such a refreshing and innovative film, it mixes genres seamlessly and is as effective in its subtle vision of the future as it is a twisted action thriller. But more important, neither of those elements take from the fact that this is a personal story about a flawed broken man looking for redemption. He is not a hero, he doesn’t want to be, and this just ads to a project that I cannot describe but as groundbreaking, setting the bar incredibly high for future entries into similar projects.

I left the theater thinking about the film. It challenged me during and after viewing it, I have to give it to a project that can be that smart in every way. And as any great piece of art, it has the ability to spark your mind, formulating questions, even on a personal level. How would time travel affect your own life experience if it was accessible to you? And as with this film I don’t have all the answers at the end. I guess I’ll just have to wait for the future to arrive the old fashion way. At least for now.