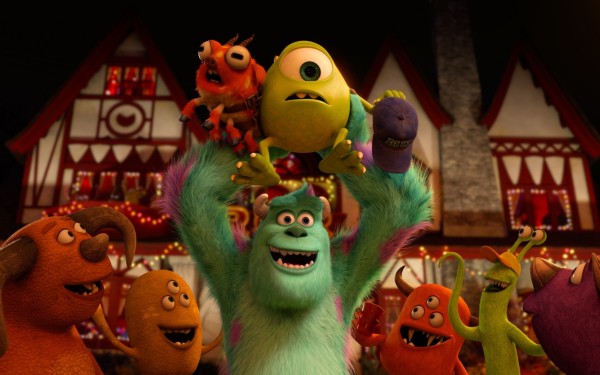 Who hasn’t been an outcast at some point or situation in their lives? Do we ever really get to know what are we capable of? Those are questions so common and so universal that no matter who you are you can relate to them, even if the outsiders are not even human at all. In Monsters University we don’t go back to visit Boo or watch Mike and Sully appear in TV ads on Monstropolis, but we go even further, we go to places than can be very intimidating. Even for a monster.

Director Dan Scanlon managed to find elements of surprise and discovery in a story we know the end of. And if this already sounds impressive, he also managed to add background to characters that are beloved and iconic, telling a story that is as deep and heartfelt as it is entertaining.

Billy Crystal and John Goodman are back in the main leading roles, and this time around they are joined by Nathan Fillion, Sean Hayes, Dave Foley, Aubrey Plaza and Charley Day, who plays a hilarious student named Art. Helen Mirren voices Dean Hardscrabble, in a spot on performance as the terrifying head of school and one of the top “scarers” of all time.

But even with creepy-crawling looking creatures, this film is nothing but pure eye candy: from the exquisite attention to detail we are used to in previous Pixar features, to a delightful use of color and imaginative character design. The wide shots of the campus were you get to see all the different shapes and abilities of every single monster alum are nothing short of spectacular. Even the opening short to the film, “The Blue Umbrella” is absolutely stunning using mixed media, and I dare you not to smile at the end of it.

But where this film shines is not in the visuals, or the great humor that’s also prevalent, but on the places it dares to go. It deals with concepts of self image, what really means to achieve your dreams in life and go places, and many more that are as relevant as eye opening, not only to kids. I really have to admire a film that is not afraid to try new things and successes in the process, even more being a big studio summer release, not even mentioning a family film.

Monsters University is funny, charming and utterly entertaining. A visually stunning film that is as smart as it is heartfelt, with a relevant message aimed to both kids and adults. Because certainly we have all been there: felt misunderstood, an outcast, a “monster”. But that doesn’t always necessarily mean a bad thing.

One thought on “Monsters University”